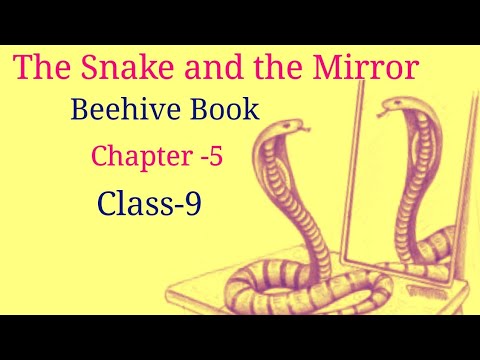 I. Discuss in pairs and answer each question below in a short paragraph

Question 1.“The sound was a familiar one.” What sound did the doctor hear? What did he think it was? How many times did he hear it? (Find the places in the text.) When and why did the sounds stop?

Answer:The doctor heard the sound of rats. The sound was a familiar one. He heard this sound four times. The phrases are ‘Again I heard that sound from above’, ‘Again came that noise from above’, ‘Suddenly there came a dull thud as if a rubber tube has fallen’. The sounds stopped after the appearance of the snake.

Question 2.What two “important” and “earth¬shaking” decisions did the doctor take while he was looking into the mirror?

The doctor took the following two ‘important’ and ‘earth shaking’ decisions:
(a) He would shave daily and grow a thin moustache to look more handsome.
(b) He would always keep that attractive smile on his face.

“I looked into the mirror and smiled,” says the doctor. A little later he says, “I forgot my danger and smiled feebly at myself.” What is the doctor’s opinion about himself when (i) he first smiles, and (ii) he smiles again? In what way do his thoughts change in between, and why?

Answer:The doctor thought that he had a good smile when he first smiled. But when he smiled a little later, he laughed at his destiny. His life was in danger. His thoughts got changed because of the snake. He was quite near to death.

II. This story about a frightening incident is narrated in a humorous way. What makes it humorous?

(Think of the contrasts it presents between dreams and reality. Some of them are listed below).

Write short paragraphs on each of these to get your answer.

Can you find the expressions in the story that tells you that the author was frightened? Read the story and complete the following sentences.

Question 3.In the sentences given below some words and expressions are italicised. They variously mean that one

Match the meanings with the words/ expressions in italics, and write the appropriate meaning next to the sentence. The first one has been done for you.

Question 4.Report these questions, using if/whether or why/when/where/how/which/what. Remember the italicized verbs change into the past tense.