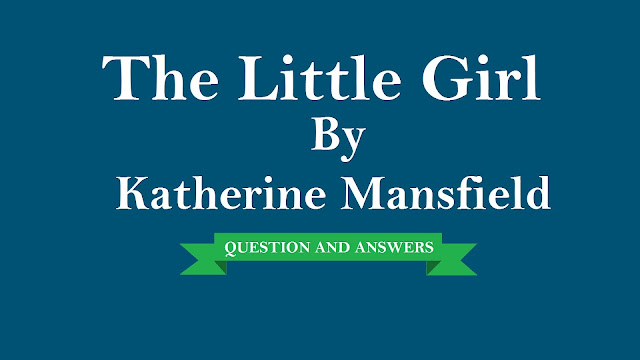 Form pairs or groups and discuss the following questions:

Question 1.This story is not an Indian story. But do you think there are fathers, mothers and grandmothers like the ones portrayed in the story in our own country?

Answer:There is no doubt that the Indian families too have such fathers, mothers and grandmothers. In this world of cut-throat competition everyone aspires for success. So, the parents (father and mother) get employed to provide the children with all the worldly comforts. But they fail to comprehend the psychology of the tiny tots and make them feel isolated. Children need parents’ time and love. They want that then- parents should interact with them humbly and without hurting their feelings.

Question 2.Was Kezia’s father right to punish her?What kind of a person was he? You might find some of these words useful in describing him:

Answer:Kezia’s father was not right to punish her. He should have understood that she was only a child and a child tends to make mistakes. A child’s mistake should always be mended.

On the one hand, he was strict, unkind and short tempered. On the other hand, he was hard-working, responsible and caring to his family. He worked hard all day long and got tired. So, he was compelled not to give any time to Kezia. At heart he cared and loved Kezia very much. When she got frightened due to a nightmare, he immediately came to her with a candle to know what had happened to her. It shows that he cared her very much.

Has your life been different from or similar to that of Kezia when you were a child? Has your perception about your parents changed now? Do you find any change in your parents ’ behaviour vis-a-vis yours? Who has become more understanding? What steps would you like to take to build a relationship based on understanding? Write three or four paragraphs (150-200 words) discussing these issues from your own experience.

Extract Based Questions  (3 marks, each)

Read the passage given below and answer the questions that follow:

Question 1:To the little girl he was a figure to be feared and avoided. Every morning before going to work he came into her room and gave her a casual kiss, to which she responded with ‘Good Bye Father’. And oh, there Was a glad sense of relief when she heard the noise of the carriage growing fainter and fainter down the long road! ,

Question 2:But the same old nightmare came the butcher with a knife and a rope who came nearer and nearer, with that dreadful smile, while she could not move, only stand still, crying out “Grandma!”. She woke shivering to see father beside her bed, a candle in his hand. “What is the matter?” he said.

Question 3:“But it was for your b-b- birth day.” Down came the ruler on her little, pink palms. Hours later, when grandmother had wrapped her in a shawl and rocked her in the rocking-chair, the child clung to her soft body. “What did God make fathers for?” she sobbed.

Question 4:On Sunday afternoon, Grandmother sent her down to file drawing room to have a “Nice talk with Father and Mother”. But the little girl always found mother reading and father stretched out on the sofa, his handkerchief on his flee, his feet on one of file best cushion, sleeping soundly and snoring.

Question 5:She sat on a stool, gravely watched him until he woke and stretched, and asked the time – then looked at her. “Don’t stare so, Kezia. You look like a little brown owl”.