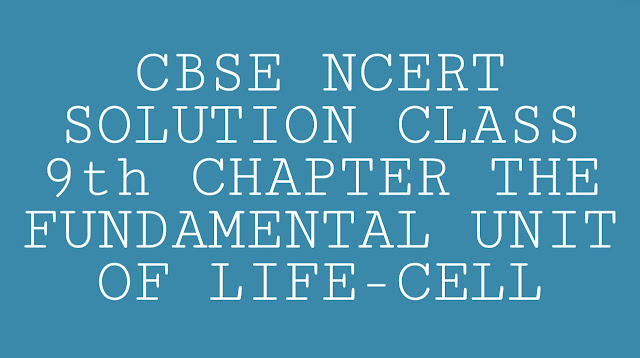 1.  Who discovered cells and how?
Answer– Cell was discovered by an English Botanist, Robert Hooke in 1665. He used self-designed microscope to observe cells in a cork slice back then.

2.  Why the cell is called the structural and functional unit of life?
Answer- Cells are called the structural and functional unit of life because all the living organisms are made up of cells and all the functions that take place inside the organisms are performed by cells.
3.  How do substances like CO2 and water move in and out of the cell? Discuss?
Answer- The substances like CO2and water move in and out of a cell through the process called diffusion from the region of concentrated region to low concentrated one. When the concentration of carbon di-oxide and water is higher in external environment than that inside the cell, CO2and water moves inside the cell. When the concentration outside the cell is low but it is high inside the cell, they move outwards.

1.  Make a comparison and write down ways in which plant cells are different from animal cells.
Answer
2.  How is a prokaryotic cell different from a eukaryotic cell?
Answer
3.  What would happen if the plasma membrane ruptures or breaks down?
Answer– If ever the plasma membrane ruptures or breakdown then the cell will not be able to exchange material from its surroundings by diffusion. As a result of it the protoplasmic material will disappear and the cell will die.

4.  What would happen to the life of a cell if there was no Golgi apparatus?
Answer– Golgi apparatus performs the function of a storage modification and packaging of products. If Golgi apparatus is not there then materials synthesized by cell will not be packaged and transported.
5.  Which organelle is known as the powerhouse of the cell? Why?
Answer– Mitochondria are known as the powerhouse of cells because energy required for various chemical activities needed to support life is released by mitochondria in the form of ATP (Adenosine triphosphate) molecules.
6.  Where do the lipids and proteins constituting the cell membrane get synthesized?
Answer– Lipids are synthesized in Smooth endoplasmic reticulum and the proteins are synthesized in endoplasmic reticulum.
7.  How does an Amoeba obtain its food?
Answer– Amoeba obtains food using temporary finger-like extensions on the cell surface which fuse over the food particle forming a food-vacuole. Complex substances are broken down into simpler ones inside the food vacuole which then diffuse into the cytoplasm. The remaining undigested material is moved to the surface of the cell and thrown out resulting in excretion.
8.  What is osmosis?
Answer- Osmosis is the process in which water molecules moves from the region of high concentration to a region of low concentration through a semi permeable membrane.